The VOOPOO DRAG S (Canada) is a 60W Mod Pod Kit and powered by an internal 2500mAh battery. The built-in Gene.TT chipset is the latest tech from VOOPOO, bringing an amazing vaping experience to the vapers.

The VOOPOO Drag S is a pretty solid all-around vape unit with a few minor drawbacks. I recently spent a month using a Drag S & a SMOK Nord5. Both units were purchased from libertyvape.ca, and the following is a review/comparison of the two units: A friend recommended the Drag S and I decided to give it a try. It delivers good clouds, has a nice front-facing full-colour screen, a large, long lasting battery (2500mAh), and the “retro” themed body style I chose sports a stylish and refined look. Unfortunately, the tank/coils leaked pretty badly no matter what I did or how full or close-to-empty the tank was. Leaks are a pretty common, almost unavoidable reality of units like these, but the Drag S seemed to leak worse than normal. The unit is not usable while charging, and my particular unit also had significant problems with the auto-draw feature. The pneumatic auto-draw sensor was finicky to begin with, and continually got gummed up due to the tank/coils leaking, disabling the auto-draw feature entirely. It must then be cleaned with an alcohol-soaked flattened Q-tip (tip pushed to one side to slide into the sensor area under the tank) to work again, and even when maintained the auto-draw feature on my unit didn’t work reliably. Auto-draw also doesn’t really work at all with the airflow adjustment open all the way for DTL (VOOPOO confirmed that the airflow shouldn’t be adjusted all the way open as there is not enough negative air pressure for the auto-draw feature to function properly). I may have just got a bad unit, but I couldn’t get my auto-draw to work consistently during my daily usage of the Drag S. These issues and it’s weight and size kept me on the hunt for a slightly sleeker unit with similar performance. I ended up replacing the Drag S with a SMOK Nord5 in the same retro gunmetal/leather theme. The Nord5 isn’t perfect either, but has many similar capabilities to the Drag S with fewer apparent problems, higher peak wattage, and a slimmer, lighter design. Although they are dimensionally pretty close, the design of the Nord5 makes it much more comfortable to travel with. This is especially noticeable when carrying it on your person. The SMOK Nord5 doesn’t have an auto-draw feature, which is unfortunate, but has a slightly bigger tank that snaps tightly into place (providing a more secure fitment compared to the magnetic tank on the Drag S), and the tank leaks very little (if at all) when filled and secured properly. The Nord5 has a smaller one-colour, side-facing screen than the Drag S with similar power-lock/adjustment controls, a slightly lower battery capacity/life (2000mAh), with a bit higher peak wattage (80w compared to 60w on the Drag S), and also features a handy wattage-lock feature to prevent accidental watt adjustment. These pros of the Nord5 seemed like a worthy trade-off for losing the shaky auto-draw and slightly longer lasting battery of the Drag S. Both have good, widely available coils in varying sub-ohm versions to meet your preferences and deliver good flavour and clouds. I haven’t actually noticed much of a difference in battery life with the Nord5 vs. the Drag S. Both units will get you through a full day as long as your wattage isn’t cranked. I also don’t mind the button-only activation of the Nord5, so it wasn’t really a contest between the two, at least for my needs, although an auto-draw on the Nord5 would definitely be a nice addition. Hopefully an auto-draw feature will be included on the Nord6 whenever it comes out. Overall, the Drag S is a good unit, and tank leakage is a fairly common issue across many similar units, but the SMOK Nord5 fits my needs better, and if it ever does leak, it’s a tiny, tiny bit under the pod that is essentially a non-issue. If your considering either of these units, a deep dive on the internet of reviews and comparisons will provide a more comprehensive and detailed overview of the specs and features offered from each of these units. Owning them both, I can say that I couldn’t really ask for a better back-up for my Nord5 than the Drag S. They will both give you what you need. Most of my choice for the Nord5 as my main unit was based on personal preference, as they are both quite similar in performance. It sure is nice though to grab that sleeker Nord5 out of my pocket and know that it hasn’t leaked e-juice everywhere. I keep the tank between 25%-75% full and it almost never leaks. That peace of mind is really nice when your going for a quick puff outside of the pub or having a break during the workday knowing you won’t have to clean up a mess in your vape unit or pocket. I’d give the Drag S 3.7 stars, whereas the Nord5 gets a solid 4.3 out of 5. An auto-draw feature and a colour screen would propel the Nord5 to an easy 5 stars. Both are similar in performance, but the SMOK Nord5 firmly edged out the Drag S. As always, libertyvape.ca shines with unsurpassed customer service, competitive pricing, and lightening-fast shipping. Shop with confidence 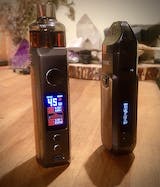 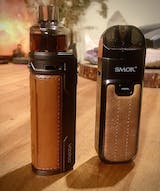 Great vape, works as it should, fits perfectly in the hand and has great flavour

I use with salt nic at 18-22w with the PnP-VM4 0.6 ohm coils. Huge tank, huge battery, instant power. Great air flow adjustment. Was a replacement for my DotMod that was getting old.

p.s.: I appreciate Liberty vape waited 30 days before asking me for a review. This is the only vape I use and its doing a great job.

Over all build is nice. Battery life is solid. Leaky coils a problem. Have taken my apart twice in 6 weeks to give proper cleaning.

12
We Also Recommend
Sold Out